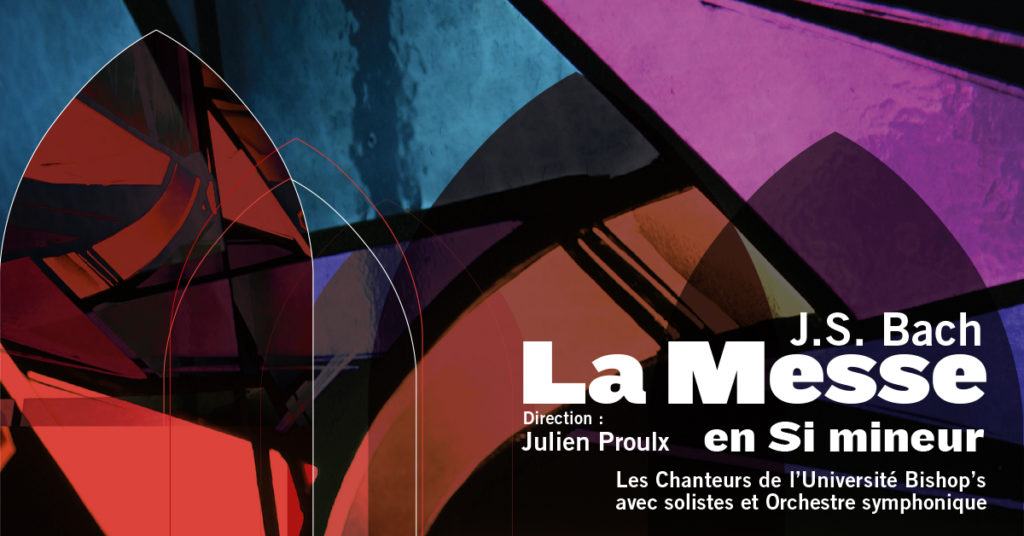 01 NovBishop’s University Singers to celebrate their 50th anniversary with an ambitious concert – The B minor Mass by J.S. Bach

Sherbrooke, October 26th, 2017 – On November 25th and November 26th, the Bishop’s University Singers will perform the B minor Mass by J.S. Bach under the direction of guest conductor Julien Proulx in the magnificent Abbey of St-Benoit du Lac Abbey (25th) and the splendid Église St-François-Xavier de Bromont (26th). A large orchestra will accompany our forty singers, and the soloists will be sopranos Melinda Enns and Marie Magistry, mezzo-soprano Marie-Andrée-Mathieu, tenor Jacques-Olivier Chartier and baritone Alexandre Sylvestre.

The B minor Mass by J.S. Bach is the crowning achievement of a life dedicated to sacred music.  As complex and as magnificent as it is enjoyable to listen to, the work is inexhaustible in its richness and invention.  It is considered one of the most demanding choral works in the repertoire.

« It is the perfect work to pay homage to Howard Brown and to celebrate our 50th anniversary » says Dr. Jack Eby, professor of musicology and Chair of the Music Department at Bishop’s University.  Howard Brown, who founded the choir along with the Music Department in 1967, was in indeed a fervent admirer of Bach and had a particular fondness for the B minor Mass.

«It’s a highly ambitious and gratifying project for our choir members » adds Fannie Gaudette, Director of the Bishop’s University Singers.  The Singers are thrilled to work with guest conductor Julien Proulx, Artistic Director and conductor of Orchestre symphonique de Drummondville. Over the past ten years, he has been conductor in residence with Orchestre de chambre I Musici de Montréal and artistic director of Orchestre des jeunes de Sherbrooke and Orchestre de l’Université Laval.  He has also directed, as guest conductor, the Violons du Roy, Orchestre Métropolitain, Orchestre du Festival international de Lanaudière as well as the Montréal, Laval, Sherbrooke and Saguenay-Lac-Saint-Jean symphony orchestras.

Julien Proulx is dynamic and passionate.  His generosity and great skills as communicator enable everyone, performers and listeners, to better understand the masterworks of classical music.  Prior to the two concerts, M. Proulx will give a Lecture on the B minor Mass and direct an open rehearsal on Wednesday, November 8th in Bandeen Hall at Bishop’s University starting at 7 pm – all are welcome. It will be a wonderful opportunity to delve into the captivating realm of Bach through this masterpiece.

B minor Mass by J.S. Bach

In 1733, the sudden death of the sovereign Frédéric-Auguste, Elector of Saxony and King of Poland, sent all of Saxony into national mourning.  Any elaborate sacred music was banned for a six month period.  With the knowledge that the new sovereign was of Catholic faith, and in the hope of securing a position in the court, Bach took advantage of this forced hiatus to compose a Mass, setting to music the liturgical texts that were part of the Mass both for Catholic and Lutherans: the Kyrie and the Gloria. Alas, no position was forth-coming

In the end, the completed version of the B minor Mass would cover 25 years of the composer’s life.  For unknown reasons, Bach composed the final three sections of the Catholic Mass at the end of his life (the Credo, Sanctus and Agnus Dei), which were annexed to the movements composed in the 1733 Mass, creating the complete work we now have. And by “composed”, we might also say “adapted” since much of the material can be found in works composed in 1724.   The most moving example is the Crucifixus from Credo, which Bach borrowed from his Cantata Weinen klagen, sorgen, zagen, BWV 12.  The end result is far from a mere collage, however, composed in a rushed fashion for practical reasons.  It is as though Bach wished to give a second life to some of the most beautiful movements from his cantatas by using them in a final, and quite personal, testament of faith. Thankfully for us, the B Minor Mass includes some sublime musical passages that otherwise might have been lost.

The work was never performed in its entirety during Bach’s lifetime.  The extreme difficulty of the choral writing and the work’s exceptional length prevented its use in any religious service. The non-conventional setting to music of the text could have also been considered too Catholic or too Lutheran, according to each confession.  Happily, such problems do not concern us these days, although the work still demands much of its performers, and is not heard as often as it merits.

Last year the Singers offered their fans the opportunity to make special requests for their annual spring concert.  “When I received the request « Bach’s B minor Mass », I laughed and replied: « in my dreams! »”  recalls Fannie Gaudette.  She had no idea to what lengths this music lover would go to hear the B minor Mass sung by the Bishop’s Choir.  It is indeed thanks to a generous gift from this Bishop’s faculty member, in addition to an important donation from the University Singers’ main sponsor, Quebecor, that this grand concert is possible.  The generosity of Quebecor enables us not only to consolidate our concert series but also to turn dreams into reality.

Tickets are available to purchase at the Centennial Theatre Box Office by calling 819 822.9692. For online purchase or more details on the concert and the soloists, please consult our website http://www.busingers.ca/

This site uses cookies. By continuing to browse the site, you are agreeing to our use of cookies.Find out more.